There’s no better time to be in the tropical Top End than during Darwin Festival each August, where a fabulous festival wonderland awaits you. Balmy nights under twinkling lights provide the perfect backdrop for an unforgettable dry season, the Top End’s tropical winter.

Australia’s hottest winter arts festival combines the quintessential spirit and energy of Darwin with warm outdoor festivities and a vibrant program of events for an unforgettable good time. Join in the fun of hot August nights 4-21 August 2022!

Australia’s most northern and only tropical arts festival was born out of the destruction and devastation of a natural disaster over 40 years ago. Cyclone Tracy tore through the Northern Territory’s capital city on Christmas Eve in 1974 leaving behind 68 dead and 25,000 Darwin residents homeless. There was talk from some of abandoning the city site altogether but others were more determined to rebuild.

In 1977, Northern Territory Director of Health Dr Charles Gurd suggested celebrating the town’s revival with a festival that would draw the community together and reflect the optimism of those determined to rebuild.

Staged in July 1979, the Bougainvillea Festival, held on the first anniversary of the granting of self-government for the NT, was a floral festival aimed at promoting the beautification of the city.

The early years of the Festival featured such events as the Bougainvillea Queen of Quests competition, Home Garden contests, the Grand Parade – a floral procession with floats and decorated bikes – sporting events, a billy-cart derby, birdman rally and a mardi gras.

The Festival shifted its focus toward community arts in the 1990s, with a vision of becoming a cultural focus for the region through a greater emphasis on cultural performances and arts activities. Artists were recruited to work with community associations and schools to invigorate the Grand Parade, and Indigenous communities and Asia Pacific cultural groups were encouraged to have greater participation. In 1996, Darwin’s annual celebration became known as the Festival of Darwin.

In 2003 under the direction of newly appointed Artistic Director Malcolm Blaylock, the Festival was renamed to reflect its international status in the arts. Darwin Festival is a vibrant arts and cultural event with an eclectic and substantial program that takes advantage of Darwin’s delightful dry season weather and spectacular outdoor venues. Darwin Festival reflects Darwin’s position at the Top End of Australia, its unique Indigenous and multicultural population and its close proximity to Asia while at the same time showcasing some of Australia’s finest arts performers.

Darwin Festival is usually held over 18 exciting days and nights, with local and touring performances and events including outdoor concerts, workshops, theatre, dance music, comedy and cabaret, film and visual arts. During the Festival, Darwin buzzes with performers, artists, locals and visitors enjoying the vibrant and colourful atmosphere and festivities of Darwin Festival. 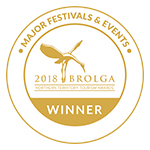